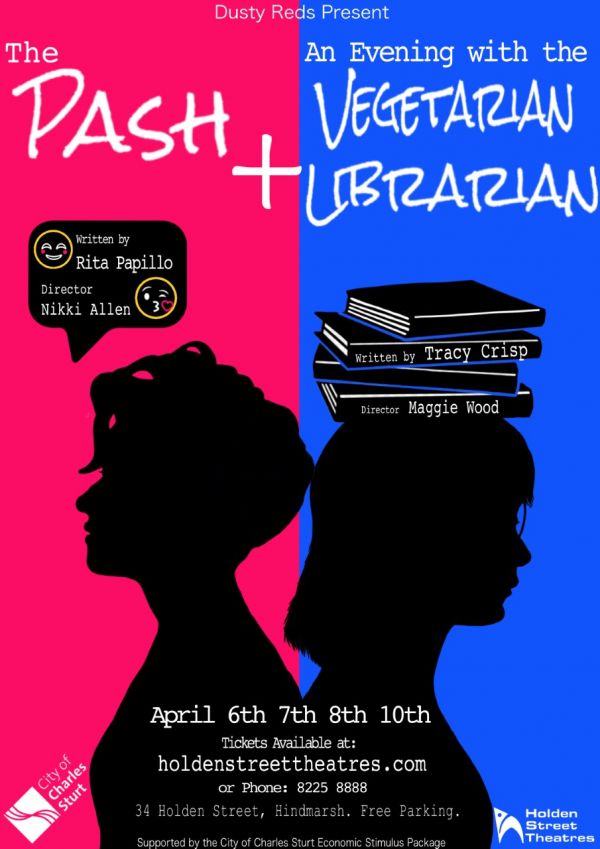 A woman has an unexpected encounter with a stranger on a spontaneous night out, sparking an introspective journey and unleashing a renewed freedom to see and be herself. Set amongst the buzz and vibe of the Adelaide Fringe, The Pash is a fun, fast-paced, multi–layered story, combining humour and pathos. The play subtly explores grief and loss and human connectivity, in a society where currency and visibility are age specific.

"Her debut production …but Mama, do you love me? was a sell-out success at the 2010 Adelaide Fringe, a fitting tribute to her considerable talents and determination as a playwright, director, and producer. Her second, critically acclaimed production, If the Walls Could Talk... combined commedia dell'arte with contemporary physical theatre techniques. The script was fast paced and moved the audience between moments of extreme pathos and hilarity, a wonderful experience for any theatre goer!" Lucy Combe, SA Playwrights

Tracy Crisp - An Evening with the Vegetarian Librarian.

She might be a vegetarian, but she's also the Gen-X meat in the inter-generational sandwich of the modern workplace. A mostly true, slightly made-up tale of thwarted ambition, underachievement, and a funeral in a library. A meditation on reading and an ode to life before the device.

Sold out at the Adelaide Fringe, An Evening with the Vegetarian Librarian once again brings Tracy Crisp's trademark blend of poignancy and humour to the stage.

Special Thanks to Navian Isuet and the City of Charles Sturt Council, the Staff at Holden St Theatres, and our friends, family and community, for their attendance and support.

Reviews for Two Short Plays: The Pash & An Evening with the Vegetarian Librarian

"Together, An Evening with the Vegetarian Librarian and The Pash make for an unmissable night of heartfelt yet biting comedic writing." - InReview

"It is beyond exciting to see new writing produced with such finesse and quality." - Stage Whispers

Rita is an independent theatre maker, playwright, Drama teacher and tutor. She has been involved in theatre and the performing arts in various capacities including producing, directing, writing, and teaching senior secondary drama for more than 30 years. She was recently invited to participate in South Australian Playwrights - New Visions Readings and her staged plays to date include, If The Walls Could Talk – produced by BlackBox at the Bakehouse 2012 and …But Mama Do You Love Me? with a sold out Fringe Season in 2010. She has extensive experience in production and direction but her passion lays in pursuing playwrighting. Rita’s preferred writing style is ‘slice of life’ drama. It is her aspiration to create accessible theatre experiences for people from all walks of life. 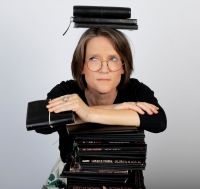 Tracy Crisp is a writer and performer of novels, memoir and monologues. Since returning to Adelaide from Abu Dhabi she has been a regular at Adelaide fringe and other storytelling events, known for work that brings a potent mix of heart and humour. With five and four star reviews, her shows are regularly sold out, often within days of opening. Each of her monologues stands alone, but echoes the others as she explores a different stage of life through her unique blend of theatre and storytelling.

"...clever, beautifully written with sentences lyrical in structure, and simple in its delivery–the booming laughter from Bakehouse Theatre’s Studio a testament to Crisp’s unique craft." Isabella Fowler, The Advertiser

"She's whimsical, witty, perceptive, and erudite and she has a glorious way with words." Samela Harris, The Barefoot Review

Nikki became a professional dancer at the age of 16, pursuing further dance training in SA and New York New York before commencing an advanced diploma in Arts, Acting in1997.

Nikki has worked as a freelance actor, choreographer, movement dramaturg, teacher, director, writer, and producer over her 29 years in the theatre industry.

Nikki has worked in film, theatre and television and continues to further her theatre practice as she is currently immersing herself in online character and improvisation performance theatre.

Nikki has worked intensively with disengaged and vulnerable youth including the Adelaide Youth Detention Centre and has developed a unique practice as a theatre worker, director, movement specialist and teacher which empowers the performer via live performance theatre practice.

Nikki is also a proud mother of two fiery young women and a deeply happy partner to her theatre worker husband. Yes... it sounds impossible, but she is very happy and very honoured to work with other strong, loving, sharing women on a script that pays homage to women our age. 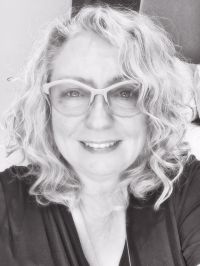 Maggie’s background in theatre goes back to her native Scotland where she trained with Mitchell School of Drama and LAMDA.

For the past 20 years she’s also forged a stand-up comedy career which garnered a few awards and nominations for her work with the original production of Titters! and Three Stuffed Mums. Her most recent acting and writing work gained a Best Event award from Adelaide Fringe for Hartstone Kitney’s Soapbox for Democracy.

As well as being comedy friends for more than 15 years, Maggie has worked with Tracy over her past four shows, first as dramaturg and then as director, and particularly enjoys the challenge of bringing Tracy’s work to stage, while making sure that her unique presence and voice are given their space to continue to attract and engage audiences.

Since graduating from Flinders Drama Centre in 2000. Katie has worked successfully interstate, overseas, and locally both on screen and stage. Some TV highlights have been playing Amelia Moon on Neighbours (channel 10), guest roles on Stingers (channel 9), Blue Heelers (channel 7). While living in Ireland she had an ongoing role on RTE’s long running soap Fair City playing Zora McCarthy

Film credits include Caterpillar Wish and Fatty Finn. Katie has also been in many short films that have been entered in both national and international film festivals and she has appeared in a number of TVC’s.

Katie is member of South Australian Playwrights Theatre Company. Recent theatre credits include their productions of Bordertown and The Middle Way both performed at Holden Street Theatre and part of Adelaide Fringe Festival. Recently Katie was invited to perform a piece for Playwriting Australia’s project Dear Australia, a collaboration of 25 small to medium companies across Australia asked to respond to the current changing world and isolation.

Lucy is a graduate from the former Centre for the Performing Arts (ACArts). Lucy has performed with the State Theatre of SA, MTC, Arena Theatre Company, La Mamma, The Australian Shakespeare Company, Zephyr Frank, and the Wooden ‘O’ Players. She regularly takes part in various play-readings and developments of new works. With friend and collaborator Katie O'Reilly as 'Dusty Reds' she co-produced and performed in ‘A Fraction of the Whole’ in the 2016 Adelaide Fringe. And again in 2019 with 'Theatre for the Time Poor'. She has appeared on television in ‘Blue Heelers’, ‘Secret Life of Us’ and ‘Last Man Standing’.

Ria Loof is an accomplished singer, musician, and entertainer, full of soulful sensitivity, and diverse ability. Ria has a performance, recording, and teaching history that is rich in diversity and has over 25 years of experience in the industry. From being an: accomplished soloist, band member and backing vocalist; Musical director and teacher, to working in front and behind the scenes in: Theatre to Festivals; concerts to cabaret.

She performs regularly in numerous corporate bands and is the music Co-ordinator for: The Wheatsheaf Hotel, Thebarton SA.

Ria is always open to new opportunities and looks forward to the next chapter of her journey in the Arts. The melodic story continues. 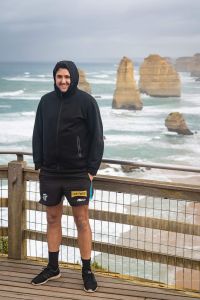 Jordan completed his Diploma of Live Production and Technical Services in 2017. Since then, he has worked on a wide variety of shows ranging from music festivals to touring with bands, to opera and finally theatre. Jordan has done the lighting design for Co-Opera’s past two operas and oversaw the successful country-wide tours that followed.

Jordan's most recent works include lighting design for Martha Lott's "That Boy" as well as many other shows to pass through Holden Street Theatres during the 2021 Adelaide Fringe.

Supported by the City of Charles Sturt Economic Stimulus Package 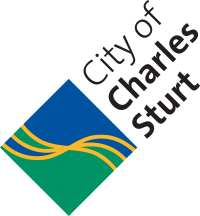 HST is incredibly excited to present a safe and secure night out. To ensure public safety we have implemented a COVID Safe plan. Social distancing, density and hygiene practices will be adhered to at all times. Only attend the event if you are feeling well. If you have any COVID-19 symptoms please ensure you get tested as soon as possible and follow social isolation guidelines until you recover.