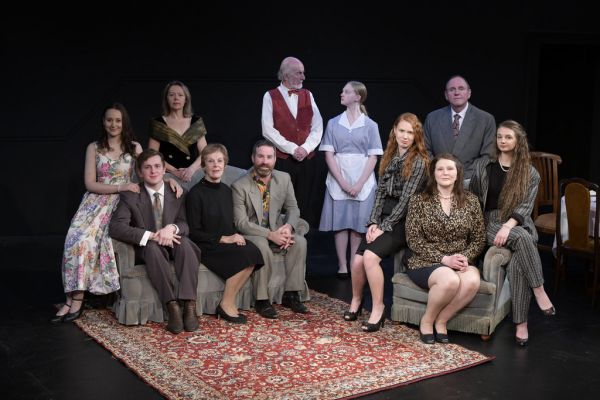 SOLD OUT!
The rest of the season run for Dividing the Estate has Sold Out with no more tickets available. Thank you for your support.

Reviews for Dividing the Estate

"Red Phoenix Theatre has already a firmly established reputation for bringing stimulating, well acted and well produced plays to Holden Street Theatres where it is the resident company. This play lives up to that standard." - 5MBS

"The strength of this piece is... in the intricacies of the characters, who each have layers of complexity, and the superb cast who really honour them." - The Theatre Association of South Australia

"A satisfying night at the theatre" - Stage Whispers

"Drake has successfully assembled a superior cast and created a first production of which she can be justly proud. I think that we can expect more to follow." -Broadway World

" The audience... left the theatre singing praises to its fabulous cast." - The Barefoot Review

"A first-rate cast who present a superior fast-paced performance... Best to book to avoid missing out." Weekend Notes

"Libby Drake faultlessly directs on this, her debut" - The Weekender Herald

Set in the fictional town of Harrison, Texas in 1987, our story focuses on the Gordons, a clan of malcontents ruled by octogenarian matriarch Stella that must prepare for an uncertain future when plunging real estate values and an unexpected tax bill have a negative impact on the family fortune.

Stella's children - predatory Mary Jo, complacent Lucille, and alcoholic Lewis - engage in a debate about whether or not they should divide the estate while their mother is still alive in order to ensure themselves financial independence. Dividing the Estate is a darkly funny tale of greed, rivalry, and unbreakable family bonds.

Featuring the much-loved and award winning Adelaide actor Jean Walker under the direction of Libby Drake, Dividing the Estate is not to be missed! 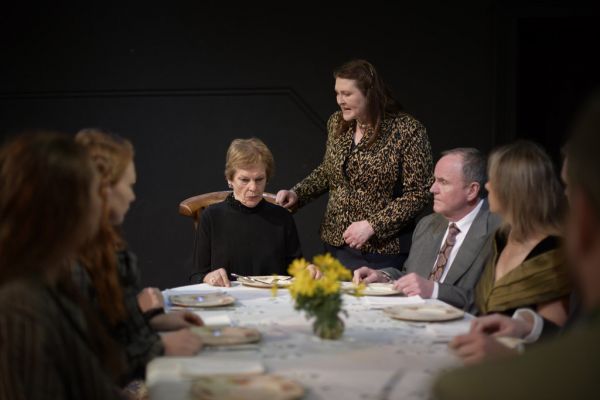 Kate Anolak has performed with various Adelaide companies in plays including Nell Gwynn, Our Man in Havana, Jane Eyre, and Shakespeare’s Waiting Room, and in musicals including principal roles in Holiday Inn, Nunsense, Company, Les Misérables, A Funny Thing… Forum, and Into The Woods and ensemble roles in Spring Awakening, Sweeney Todd, Pippin, The Drowsy Chaperone, The Producers, and They’re Playing Our Song. Interstate and overseas she has performed in productions of Jack The Ripper, Stepping Out, Grease, Anything Goes, Macbeth, and Best Little Whorehouse in Texas, and Company. She directed A Little Night Music (nominated for Best Musical), Side By Side By Sondheim, A Funny Thing… Forum, A Slice of Saturday Night, and I Love You Because, and worked in stage management for professional and non-professional productions.

Wayne Anthoney is happily performing for the third time for Red Phoenix, other roles being Don in Don Parties On and as the Secretary for Defence in The White House Murder Case.Wayne’s first theatrical performance was as the Pied Piper, in the Hobart Playhouse, in 1953. There followed many decades of amateur and professional theatre shows, for STC, The Guild, Footlights, you name it. His first film role was as the undertaker in Sunday Too Far Away (1974) and his most recent was as John Clark’s demented father in A Month of Sundays. Television work included being Humbolt the Clown on Fat Cat and Friends for most of the 1980s. Wayne was awarded an OAM in 2014 for "Service to Indigenous Australians, and to the performing arts". All in all, he's done a fair bit.

Laura Antoniazzi appeared most recently in Red Phoenix's A Bunch of Amateurs. Other stage credits include The Great Gatsby and Before the Party with Independent Theatre, where she was nominated for TASA’s Best Female Actress Award; Glorious!, A Murder is Announced, Leading Ladies with Therry; Picnic at Hanging Rock, The Changeling, The Way of the World with the Theatre Guild; autobahn with Butterfly Theatre; The Memory of Water and Rose’s Dilemma with St Jude’s Players. Laura has performed in four shows with Galleon; One Slight Hitch, Loves and Hours, Jake’s Women and Sex Cells. She’s also trodden the boards with The Adelaide Rep in Palace of Varieties and It’s Just Sex. Laura’s professional credits include a book week touring show The Wonderful World of Roald Dahl, and the West Terrace Cemetery by Night Tours.

Eliza Bampton is appearing in her second performance with the Red Phoenix Theatre company, last year playing Linda in The Man From Earth. She has also played Helena in A Midsummer Night’s Dream and Jessica in Shimmer. Eliza has featured in the TV program Behind The News and has trained in a screen acting workshop with Angela Heesom. For nine years she was also a student at Theatre Bugs, South Australia’s largest performing arts school. Eliza is a university student, studying a Bachelor of Social Work (Honours).

Brandan Cooney is appearing in his third show with Red Phoenix and feels very privileged to have been asked to be part of such a wonderful cast. Over the years he has performed in a good number of musicals and plays with different companies. Shows in 2019 include The Middle Way and Bordertown for South Australian Playwrights Theatre and Peggy Pickit sees the Face of God for Joh Hartog Productions. He hopes you enjoy this production of Dividing the Estate.

Gabi Douglas has been performing since the age of 6 with Tea Tree Players for 4 years. Then continuing drama throughout her high school education as well as acting as a teen surrogate patient for student training purposes at Adelaide University. In 2016, Gabi performed in her first adult amateur show in The Crucible with the Theatre Guild and in 2017 she appeared in The Conspirators for Red Phoenix. Gabi’s most recent show was last years, Picnic at Hanging Rock, again with The Guild. As Gabi has always had a passion for theatre, she is now venturing into film work.

Lindsay Dunn has been performing since 1976, and is an accomplished singer/guitarist. His roles included: The Father in Shout! - opposite the legendary Toni Lamond, Pontius Pilate in Jesus Christ Superstar, Doolittle in My Fair Lady, Andre Thibbault in Dirty Rotten Scoundrels, Rev. Parris in The Crucible, Herbie in Gypsy!, Dale Harding in One Flew Over the Cuckoo’s Nest, Thenardier in Les Miserables, John Tarleton in Misalliance , Romeo in A Tender Thing, Howard in Cheaters, Killigrew in Nell Gwynn, Dogberry in Much Ado About Nothing, The Duke in Two Gentlemen of Verona, and four different characters in Henry V.This is Lindsay’s third appearance with Red Phoenix, having played Harry in last year’s production of The Man from Earth and Nigel in A Bunch of Amateurs earlier this year.

Jasmine Leech considers her major achievement in theatre was producing and directing a production of Rhinoceros by Eugene Ionesco in 2016 as a part of the Adelaide Fringe Festival. A few bumps on the road lead to Jasmine also taking on the lead role in the production, Berenger. Since then, she has been undertaking a Bachelor of Psychological Science at Flinders University. Earlier this year Jasmine took on her first stage managing role for the locally produced and written production called After Life: Conversations in a Hospital Waiting Room by Robert Baulderstone. Jasmine has worked with Red Phoenix Theatre previously as a SFX operator on their productions of The Flint Street Nativity and A Bunch Of Amateurs.

Mark Mulders graduated from Mercedes College in 2017. He has been studying drama for 11 years with Peta Louise Drama and Speech Academy and has progressed through both AMEB and Trinity Exams. Mark joined Independent Theatre as Jem Finch for the revival of To Kill a Mocking Bird (2012). He was ASM for Playboy of The Western World (2013) then the young king, Ptolemy, in Caesar and Cleopatra (2014). In 2015, aged 14, he stage-managed Long Days Journey Into Night. This was followed by a number of roles in The Great Gatsby (2015) and assistant stage-managing Red Velvet. In 2016 Mark stage managed The Matchmaker and played Parsons in ROSS. Last year he appeared in Caligula for Red Phoenix. Mark is working on making acting his full time career.

Cate Rogers has been knocking around amateur theatre since shortly after dinosaurs roamed the earth, including performing with various University of Adelaide outfits, The Adelaide Rep, Parting Company, Crescent Company, SA Writers Theatre, and the Adelaide Irish Club Drama Group. Cate has had a long association with the Theatre Guild including appearing in The Real Inspector Hound, First Time Out, A Streetcar Named Desire, Antony and Cleopatra, Influence, Richard III, Holy Day (as Nora) and Romeo and Juliet (as Nurse). Most recently Cate has appeared as Linda in Death of a Salesman for Therry, Lorna in The Effect for the Theatre Guild and M’Lynn in Steel Magnolias for Ip Skip Productions. Cate is delighted to join the Red Phoenix team for this show.

Jean Walker first trod the boards in pantomime (an essential part of Christmas entertainment in England). Arriving in Adelaide she joined the Mayfair Light Opera Society playing Ellie May in Showboat and Aunt Eller in Oklahoma. Bruno Knez’s workshop led to many great roles with the Adelaide Rep. Although she has worked for various groups this is her first play for Red Phoenix. Last year Jean won the Adelaide Theatre Guide’s Curtain Call Award for Best Female Performance for her portrayal of A in Three Tall Women for ATG. Spare time? – very little. She is a homestay Mum to international students and a Volunteer/Tour Guide for the National Trust, St. Peter’s Cathedral and Adelaide Festival Theatre.

Nicole Walker's most recent highlight was a production with the Flinders University Performing Arts Society. As part of her drama studies at Flinders University, Nicole spent a year studying theatre at Pacific University, Oregon. She performed in two of Pacific’s productions, including a world premiere, Hide by Ellen Margolis, an adaption of Eugene Ionesco’s Rhinoceros. She also starred in the production of Opening a Fuzzwollop’s Frame of Mind in the 2016 Adelaide Fringe Festival. This will be Nicole’s first production working with Red Phoenix Theatre.

Lynn Wilson has been involved in theatre for many years initially with St Jude’s Players. She joined Independent Theatre in 1989 where favourite roles include Stella in A Street Car Named Desire, Helen mccormick in The Cripple of Inishmaan, Mrs de Winter in Rebecca, Anne Lindbergh in Hauptmann, the adult Scout in To Kill a Mockingbird, Jane Wilson in Free Man of Colour and Amelia in Othello. Lyn has performed in six Red Phoenix productions, Titus Andronicus, Don Parties On, Two Brothers, Caligula, The Man from Earth and Flint St Nativity. In 2017 she performed the role of Rose in Rose’s Dilemma for St Judes Players and Lady Marchmain in Brideshead Revisited for Independent Theatre. In June she performed in a staged play reading of Oscar Wilde’s Lord Arthur Saville’s Crime for Independent theatre.