"You're following little yellow arrows across a country, which is kind of crazy".

In 2016, playwright Sarah Peters walked the Camino de Santiago, an 800-kilometre hike across Northern Spain that has been travelled by pilgrims for centuries.

She went to discover the stories of other adventurers - but she also had to confront her own. Drawn from encounters with real people walking ‘The Way’, Blister explores what happens when daily life is reduced to a 10 kilo pack, a pair of boots, and a series of yellow arrows pointing you in the right direction…most of the time.

Listen to an exclusive interview with Kirrily Snape and Sarah Peters here.

Q & A with Sarah Peters

Why did you decide to walk the Camino de Santiago?

I had heard about the Camino many years ago, and at that time it seemed completely beyond something that I would ever be capable of doing. Then I heard about it again, and saw the film ‘The Way’, and I couldn’t stop thinking about it. The idea of going stuck in my mind, both as an amazing adventure and personal challenge, but also as a place where there would be people from all over the world with amazing stories that might make an interesting play. I was walking with my sister one day when I said ‘I’ve got this idea about doing this big long walk in Spain, and writing a play about it’…and while I remember she was a little nervous for me, she also encouraged me and I thought ‘ok, maybe I can do this’. I wasn’t really a big walker at that time, so I set myself a training program that started with walking 5kms a day, six days a week. The next month it was 6kms, then 8kms, then 10kms…until the month before I left for Spain I was walking 18-21kms a day six days a week. I was finishing my PhD at the same time, so it was a great balance between physical activity and the more sedentary aspects of writing.

What was the biggest challenge of your journey?

There were so many challenges, how can I pick one! They’re mostly included in the play, but I’d say the first day was an incredible physical challenge walking through the French Pyrenees, and the days of non-stop rain were pretty intense too.

Why did you decided to share your story on the stage?

I had always intended to write a play about this experience, but I didn’t really know what form that play might take, or how much my own story would be included. The central protagonist in Blister, Rosie, is based primarily on my experience with a bit of creative licence taken here and there. The play is not so much about her as it is about the people she meets, the stories that were shared, and the humanity she experienced. For me personally, walking the Camino was an incredible experience that has made me see the world and myself a little differently, and that’s part of what I hope to achieve in telling this story through theatre.

What was your favourite part (from the journey or bringing to the theatre)?

My favourite part so far of bringing the experience and stories of the Camino to the theatre has been hearing other people read the words of the play out loud. I get the thrill of remembering the story in my memory, the joy of hearing someone express the emotion I have written, and the opportunity to hear the story anew through the unique interpretation that each actor brings. I can’t wait to dive into rehearsals and see the team bring this story to life! 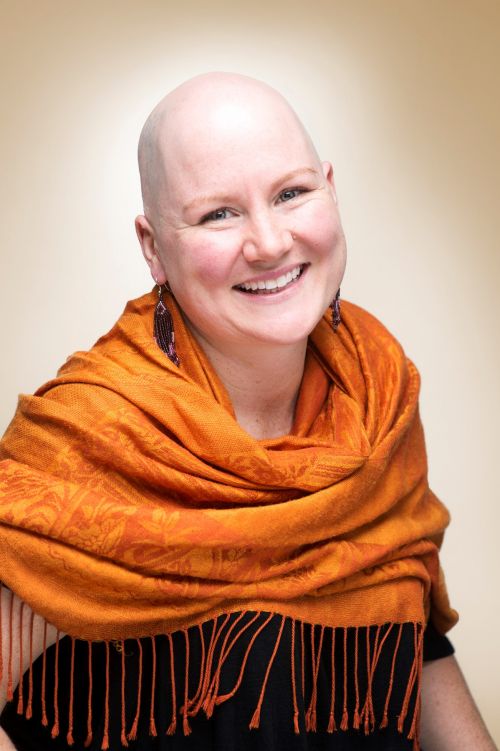 Sarah Peters is a playwright, theatre practitioner and Lecturer in Drama at Flinders University. Her plays engage with communities to tell the shared stories of experience, such as women living with Alopecia in bald heads & blue stars (2014), young people navigating mental health and wellbeing in twelve2twentyfive (2013, 2015) and growing up in small rural towns in Eternity (2017). Sarah’s practice includes facilitating collaboratively devised performance projects, most recently with D’faces of Youth Arts in Whyalla. As a practice-led researcher Sarah explores the process, method and impact of theatre practice, and her research has been published in Australasian Drama Studies, International Journal of Pedagogies and Learning, The International Journal for the Practice and Theory of Creative Writing and Drama Australia.

Tiffany recently appeared in Hydra with Queensland Theatre and the State Theatre Company of South Australia. She has performed Emily Steel’s award-winning play 19 weeks at the 2018 Melbourne, Adelaide and Perth Fringe Festivals. The production won Adelaide Theatre Guild Curtain Call Awards for Best Professional Drama and Best Professional Female Performer. It also won the 2017 Adelaide Fringe Overall Best Theatre Award, a weekly John Chataway Innovation Award, and was a finalist for two South Australian Ruby Awards. Tiffany has performed with theatre companies across Canada, including Vancouver’s Stanley Theatre (Amadeus, Communicating Doors), Manitoba Theatre Centre (Three Tall Women) and eight seasons with Bard on the Beach Shakespeare Festival (King Lear, Love’s Labours Lost, A Midsummer Night's Dream, The Tempest, Much Ado About Nothing, As You Like It, Henry IV, I, The Two Gentlemen of Verona, Henry V). On screen, she has appeared in many lead and recurring roles, including Battlestar Galactica, Stargate SG-1, Wanted, ANZAC Girls and Sam Fox: Extreme Adventures. Her directing credits include Gone Viral (Freerange Theatrix/DreamBIG Festival), Man in a Bag (Polygraph Collective), Charming and Rose: True Love (Vancouver Fringe) and The Crucible (Flinders University Drama Centre). Tiffany was awarded a PhD in Theatre from Flinders University in 2018, and was the recipient of the Vice Chancellor’s Prize for Doctoral Thesis Excellence. She is a proud member of Actor’s Equity.

Ashton Malcolm is a theatre-maker based in Adelaide. She graduated from Flinders University Drama Centre in 2009, with First Class Honours, the Malcolm Fox Drama Prize and a University Medal. She has also studied intensively with Shakespeare and Company in the USA.
Her credits include Theatre Works and Rebecca Meston: Drive (2019); Patch Theatre Company: Yo Diddle Diddle(2017-2018); Restless Dance Company: Intimate Space (Adelaide Festival 2017, Bleach Festival 2018): Windmill Theatre Company: Grug and the Rainbow(2016-2018), Windmill Theatre Company and STCSA: Rumpelstiltskin (2016); Tiny Bricks and Brink Productions: Deluge(Adelaide Festival, 2016); Vitalstatistix Theatre Company: Adhocracy (2015), Future Present (2014), Cutaway: A Ceremony (2013); Vitalstatistix and HotHouse Theatre: Quiet Faith (2014/2015); STCSA: Othello (2014).
Ashton is a founding member of a contemporary art making collective with Meg Wilson and Josephine Were. Some of the trio’s work includes SQUASH! (FOLA 2018), Team Trampoline (FELTspace 2016) and You Will Only Ever Be Any Good If You Run The Marathon (CACSA 2015).

After graduating from acting college, Tamara Lee had the pleasure of extensively touring South Australia and interstate with Splash Theatre Company, and once based in Adelaide she went on to work on various theatre productions with companies such as: Chopt Logic, Holden Street Theatres, Junglebean and SULIS Theatre Company from the UK. In 2008 she performed the one-woman play A Solitary Choice which went on tour to the Edinburgh Fringe, Seymour Centre in Sydney, Theatre Works in Melbourne and the Kansas City Fringe in the US. In the five.point.one Adelaide Premier of That Face she played Martha for which she won the Adelaide Critics Choice Award. She was in Flying Penguines’ production of The Dark Room for the State Theatre Company’s Umbrella initiative, Tutti Arts production; Eye Music, This Storm with The Un-Rest Cure – written by Ben Brooker and she has worked with Van Badham on Late Night Story. Her Film and TV credits include Look Both Ways, Closed for Winter, The Marriage of Figaro, McLeod’s Daughters and Tim Minchin’s Upright. She has also enjoyed taking part in various short films such as; Aunty Joan’s Friendly Grotto. One Mans Treasure, The Luck of the Irish, Things Have Changed, Police training video Dark Blue and Davi’, directed by Victoria Cocks. Tamara has also had extensive experience participating in roleplays for various exam environments, drama workshops and training. She is a Social Worker and Drama Facilitator as well as an Actor and looks forward to combining her arts practice with the health profession in a creative, community-focused context.

Hew is a graduate of Flinders University Drama Centre, Adelaide Australia.
In 2007 Hew was the recipient of the Neil Curnow Award where he studied at The Hunter Gates Academy of Physical Theatre one-year program in Canada. Hew has also extensively trained and mentored in the Pochinko Clowning/Clown through Mask Method with John Turner at The Manitoulin Conservatory for Creation and Performance (MCCP). In 2009 Hew returned to Manitoulin Island where he undertook a three-month mentorship to further his skills with Turner. In 2013 Hew received a grant from Arts SA to work with British Physical Comedy troupe Spymonkey in London, England.

Hew has developed several solo shows with his comedic characters – including Odyssey Schmodyssey which played at the Sanguenay Fringe Festival in Quebec, Canada as well as the Amuse Bouche New York Clown Theatre Festival; The Giovanni Experiment and Giovanni! which also played at the New York Clown Theatre Festival in September 2014 and more recently at The Wonderland Festival in Brisbane, Australia. In 2016 Hew was commissioned to produce a new work at The Adelaide Cabaret Festival Rudi’s The Rinse Cycle.

Hew has also directed Light Minded (AC Arts); The Good Doctor (Accidental Productions); The Little Blue Parcel and Mouth Music (Tutti Arts) and devised the performance No Strings versus Godzilla with No Strings Theatre of Disability. He is the resident Clown teacher at Flinders University.

The Camino de Santiago is also known in English as the 'Way of Saint James'. It is a series of pilgrims' ways leading to the shrine of Saint James the Great in north western Spain. The most popular route is the 'French Way' starting in Saint-Jean-Pied-de-Port in southern France. It follows a 800 km route to its final stop in Santiago de Compostela and takes on average 35 days to complete.

Many pilgrims follow the route as a form of spiritual path or retreat. The way is marked by yellow arrows and scallop shells to point travelers in the right direction. Over 300,000 people completed the journey in 2018 with travelers being given pilgrim passport that they can get stamped along the way to gain access to 'albergues', a form of public hostel where they can stay for the night.