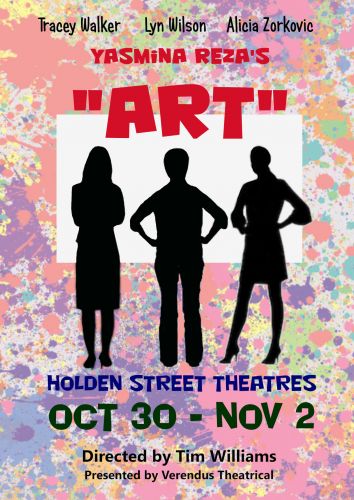 Written by Yasmina Reza in 1994, "Art" was quickly hailed as "a comedy masterpiece" by critics - and picked up several awards - including a Tony for Best Play in 1998.

The play revolves around three friends - Charlotte, Marcia and Yvonne - who find their previously solid 15-year friendship on shaky ground when Charlotte buys an expensive painting. The canvas is white, with a few white lines.

Charlotte is proud of her 100,000 dollar acquisition, fully expecting the approval of her friends.

Marcia scornfully describes it as "a piece of white shit", but is it the painting that offends her, or the uncharacteristic independence of thought that the purchase reveals in Charlotte?

For the insecure Yvonne, burdened by the problems of her impending doom (wedding) where she is stuck in an insoluble problem and her dissatisfaction at her job as a stationery sales rep, their friendship is her sanctuary, but her attempts at peace-making backfire. Eager to please she laughs about the painting with Marcia but tells Charlotte she likes it. Pulled into the disagreement, her vacillations fuel the blazing row.

Lines are drawn and they square off over the canvas, using it as an excuse to relentlessly batter one another over various failures. As their arguments become less theoretical and more personal, they border on destroying their friendship.