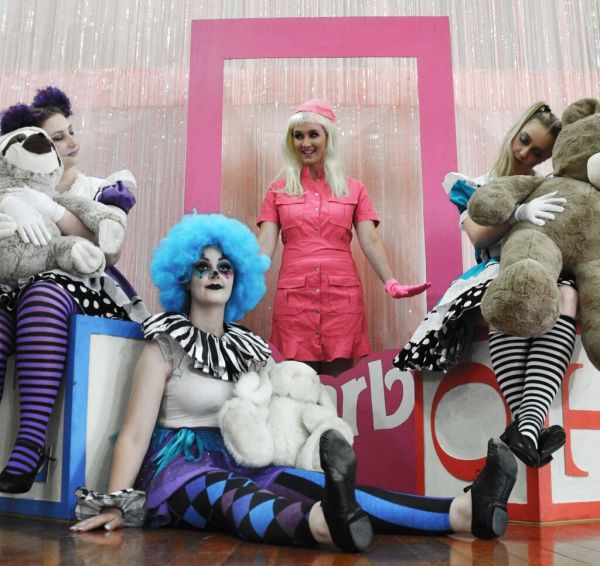 Geppetto makes the best Toys, she even brings them to life! Coco the Clown, Barbi doll and Commander Man are all her creations, but now she wants another victim, no, toy…

Tormented by delusional singing dancing toys and their Master Geppetto the victim must play a series of classic games in this manic world to get out alive.

If you liked Squid Games and Toy Story, this Musical Scary tale is for you and will keep you laughing as you enter the unhinged world of Geppetto Toys!

"This dedicated and talented group take their audience on a rollicking, fun-filled and over the top adventure and it is obvious that the cast is having a great time and this transfers to the audience." - Adelaide Theatre Guide

Caroline studied all aspects of Performing Arts at Stage School and University in her native UK, and worked as a Professional Singer, Dancer, Actress and Presenter. After touring the world on cruise ships, she moved to Adelaide where she now runs a performing arts school and teaches drama, singing and dance. Caroline is the lead producer, director, writer, composer, choreographer, and costume designer for CCtheatreCo.

Ryan Tanner is an Actor, Singer & Dancer. He found his love for performing while studying Drama and Screen studies at Flinders University. Ryan did some television and film work upon completing his studies but due to the lack of opportunity in South Australia didn't work professionally for a while. After his lengthy hiatus he rediscovered his love for the stage after becoming a part of CCtheatreCo. Ryan now plays a key role in all of our shows as one of the lead performers, set designers, writers and producers.

Janelle always knew she wanted to be on stage. It started with piano when she played with the Suzuki School of Music at the Hilton Hotel, Westfield Marion and was selected out of many to sing solo at the Festival of Music at the Festival Theatre. Janelle decided to take performing a step further and sought out opportunities to develop her skills wherever possible. Janelle has trained at Helen O’ Grady Drama Academy, Mighty Good Talent School, attended one of N.I.D.A’s workshops and completed Scene to Screen with well known television casting agent Wizzy Evans.

Janelle has performed in a number of the M.S Society’s musical theatre performances and, in 2008, joined a female vocal group Ilicious. They performed at cabaret evenings and in various hotels around Adelaide. Janelle was selected to fly to Brisbane to audition in front of the judges for X Factor after making it through all of the Adelaide audition rounds. She also gained the role as the lead vocalist and presenter ‘Lara’ in ‘Rumbo the Koala and Jumpo the Kangaroo Live Stage Show’.

Scott Allen is an experience director and actor who’s training has seen him working in many productions. He has starred in A Midsummers Nights Dream, Away, Pippin and Six Degrees of Separation. He has had numerous dual roles in acting and directing including Playing for Time and Away. His involvement with CCtheatreCo. goes back to Copacabana Club Cabaret (2016), and includes Revue and Bloodbank. Scott is looking forward to having yet another fringe show with CCtheatreCo. under his belt. Along with performing in our shows Scott is also a director with great attention to detail for our shows.

Jordan Allen (née Noble) is a singer, dancer and actor with formal training in all 3 areas. She has performed in a lead role in productions such as Playing for Time, Pippin, Away and most recently with CCheatreCo., Which-craft?. Her singing training spans over 6 years and she has experienced ample success through her involvement in the competitive dance sport of calisthenics in South Australia. Her debut with CCtheatreCo. was in Bloodbank, and after a successful season of Which-craft? then Clone-a-Patra, she is beyond excited to be working with the CCtheatreCo. in another fringe season.