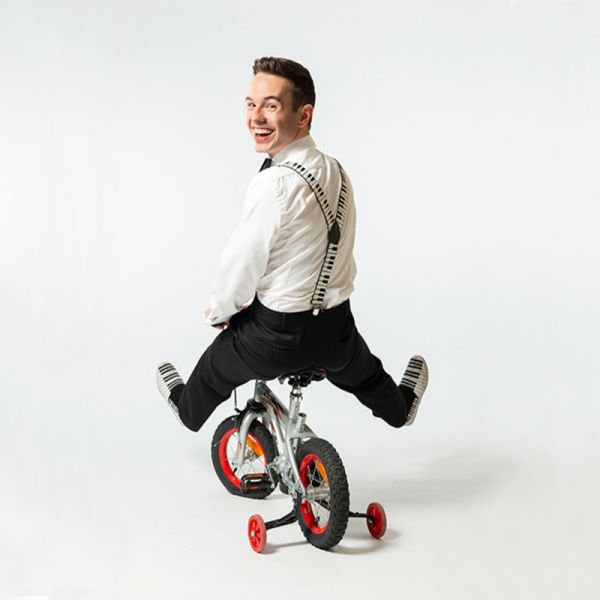 ★★★★★ "Part cabaret, part honest discussion, this is a show you need to see to fully grasp. I would highly recommend seeing Belperio perform. He is such a talented person and I look forward to watching his career progress." Tulpa Magazine

★★★★ 1/2 "The unapologetic approach to the freshness of the show added a layer of grit through the unpolished style and granted Belperio the ability to provide further storytelling, which outlined more about the personal inspirations behind the original songs." - Glam Adelaide

★★★★ "Expect to leave with a political curiosity and a desire to make change." - Weekend Notes

★★★★ "An intelligent, moving, and authentic experience by someone who no doubt will make it big one day. Bravo!" - Barefoot Review

Cabaret artist / songwriter Josh Belperio was going to bring you an existing show of his, called 'Scarred For Life'

But 4 days away from opening night, Josh decided he is not going to do that show.
Josh is too angry at the world right now.
And so he has channeled his rage into a new show.
It's called 'Right Here, Right Now.'
Josh will sing about the climate crisis and the fires and the religious freedom bill and Greta Thunberg and everything that is happening around us, right here, right now.
Join Josh for something new and raw and unpolished and unapologetic.
Josh's 2019 show '30,000 Notes' received three Fringe awards, and won the Adelaide Theatre Guide Award for Best Cabaret of the 2019 season in Adelaide.

Please Note: This show has changed name and content since being printed in the guide.

Hi, I'm Josh.
My pronouns are he/him,
I live and work on Kaurna land,
and I have synaesthesia.
Which means I hear music in colours.
It's pretty cool, but totally pointless.

Anyway, I like to sing and play piano,
write music, lyrics and play scripts,
and sometimes you'll even find me conducting a choir.

I do these various things in my one man theatre shows,
which I produce and tour around.

Last year I made a show called '30,000 Notes'
which won a heap of Adelaide Fringe awards
Including the Adelaide Festival Centre In Space Development Award
The Holden Street Theatres' Adelaide Fringe Award
and the John Chataway Innovation Award (Weekly)
It also got five stars from the 'Tiser
I guess I'm telling you all of this in the hope that you'll be impressed
and you'll want to see my work.
I hope you see this one.

This show is rated M for Mature Audiences, it contains triggering themes and course language.

Suitable for 15 years and over.

HST are making every effort to make our performances accessible to all during the 2020 Adelaide Fringe. Unfortunately, Judy's at HST does not have accessible seating. Please contact staff if you wish to see Right Here, Right Now (previously Scarred for Life) and you require accessible seating.

If you love Scarred for Life, we recommend...