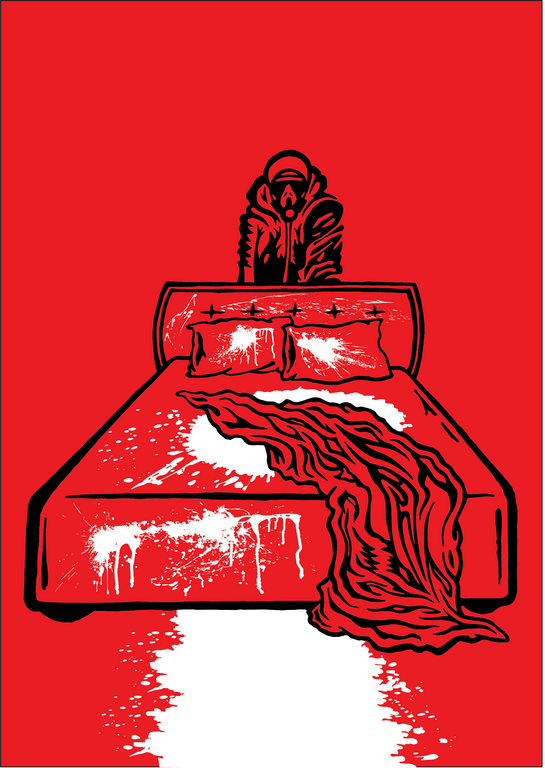 At the crime scene of a young girl found brutally murdered & on the day her murderer awaits his verdict for the crime, two forensic cleaners arrive to clear what remains - a jaded older woman at the end of her rope & a young Muslim boy working his first contract. What follows is an intimate two-hander that brings the pairs morals, cultures & secrets to the forefront.

A new play by Safari Street Creative - who brought you the "refreshingly honest and unpretentious" Our Solar System at Adelaide Fringe 2020 (Kryztoff RAW) - Lost Lives is about forgotten people, forgotten truths and the forgotten things that connect us all.

★★★★"...this rich and entertaining production will stay with you." - The Advertiser

"...it is an enjoyable night out seeing two actors work with such passion." - Stage Whispers

Safari Street Creative is a new theatre and arts company based in Adelaide which aims to create work which is dangerous, exhilarating and unpretentious. Passionate about Australian stories, Safari Street endeavours to continuously collaborate with local Adelaide artists on new and exciting projects which contribute to the vibrant and unsung calibre of Adelaide’s independent theatre.

Safari Street key creatives include Spencer Scholz and Samantha Riley. Spencer grew up in SA and studied acting at the University of Ballarat Arts Academy, having since worked as a performer,mdirector and creative with Australian Shakespeare Company, Red Stitch Actors Theatre, Melbourne Theatre Company and Aunty Donna.

Samantha Riley has performed nationally & internationally with musical productions such as The Boyfriend (The Production Company), Australia’s premiere production of Addams Family: The Musical and the most recent Gordon Frost production of Annie: The Musical alongside Anthony Warlow, Chloe Dallimore and Todd McKenney. She is also a talented theatre director having worked extensively with Holden Street Theatres and South Australian Playwrights Theatre.

Why did you want to write about the themes of forgotten things and people?

I'm always interested in telling stories about people that we overlook as it's a great starting-point for exploring different ideas and points-of-view that may be compelling, enlightening or even uncomfortable to think about. In this case, it started with my fascination with forensic cleaners - the people who clear out houses after a person has died, often in awful circumstances or without any friends or family to care for them. I wanted to explore what it might be like to work in a job environment so intensely detached yet personal connected to the last moments of strangers day-after-day and what that does to your outlook on things. That was the initial idea and the story basically built itself from there.

Did the events of 2020 influence the development of Lost Lives?

I finished first drafts of the play prior to the events of 2020 so they didn't inform the development of the story so much. However, now that we live in a world where we face the ever-present threat of COVID-19 and the tumultuous global political climate that comes with that, I think that it's very hard for that shared experience to not be reflected in arts and culture generally. It has definitely been something that has been discussed a lot as we develop the show in rehearsals in terms of our trust of strangers and how we interact with each-other so I think we have ended up leaning in to that with the final performance.

For those who loved Our Solar System, what can they expect that is different and similar in Lost Lives?

There are some similar themes between 'Our Solar System' and 'Lost Lives' - mostly in how both shows put the characters in the story into situations where they need to choose how they want to live their lives and what kind of person they want to be. But otherwise the shows are vastly different. While 'Our Solar System' was a one-man monologue telling a non-naturalistic story, 'Lost Lives' is a two-hander ensemble piece performed very naturistically with stark dialogue in one location. 'Our Solar System' was also more focused on storytelling, while 'Lost Lives' is very much about performance as the actors play off one another. We have some truly fantastic local actors in the show too in Esther Michelsen and CeeJay Singh so I can't wait for people to see the work they're doing!

What is the most relatable quality of your character?

Well I'm not in the show this year (I'll be acting as director along with my partner Samantha Riley) but both the characters in the show (Mel and Chris) feel like outsiders in one way or another - due to their cultural backgrounds, their heritage, their age, their gender, their class, all sorts of things! And I think that is deeply relatable for most people. We all feel like we don't belong sometimes and that we may not be measuring up to our full potential at some point in our lives so I hope that those qualities help people sympathize with the characters and get swept up in the story we're trying to tell.

Was the play written for someone/a type of person?

I don't really write plays or stories with any particular performers or audience in mind. All you can do is write for yourself, tell the story you want to tell and if people like it then that is a bonus. Having said that though, I do hope that people come along to the show, enjoy the performances and feel like they took something worthwhile away from it once it's over. It's incredibly humbling and exciting to speak to people after the show about their impressions and ideas about what they've seen, either good or bad, because you never truly know what a new play is until it's in front of an audience. So I'm looking forward to that.

Describe your show in 3 words
It's a mystery.

HST is incredibly excited to present a safe and secure Fringe Program. To ensure public safety we have implemented a COVID Safe plan. Social distancing, density and hygiene practices will be adhered to at all times. Only attend the event if you are feeling well. If you have any COVID-19 symptoms please ensure you get tested as soon as possible and follow social isolation guidelines until you recover.

This show is rated R18+ as it is Restricted to Adults, it contains distressing themes.

Please be advised this show includes references to Suicide/Self-Harm.

Suitable for 18 years and over

Holden Street Theatres' support of this project has been made possible through Arts South Australia funding.