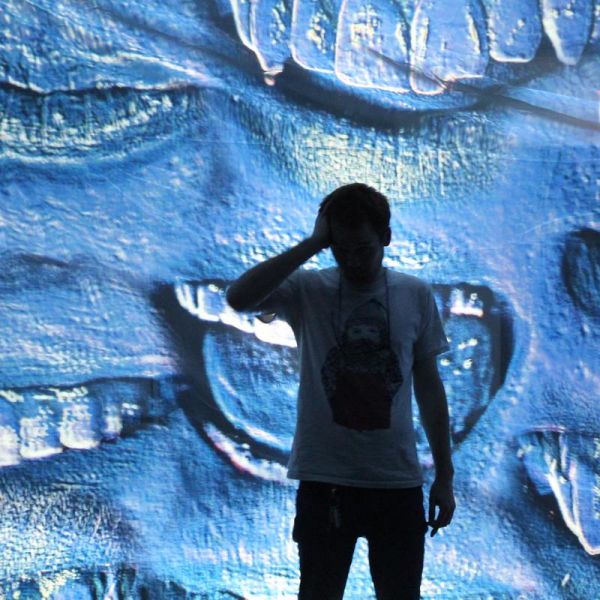 “Hey Wally, this is my friend Paula!”

“Hi Paula, nice to meet you. Do you know where the nearest exit is?”

HeySorryGottaGoBye is an honest, funny and compelling exploration of our deepest social phobias. A multisensory installation of animation, puppetry, film and soundscapes HeySorryGottaGoBye transports you into the mind of Wally, a young man plagued by the nightmares of his own insecurities.

HeySorryGottaGoBye is the second show from Claudia Osborne.

"HeySorryGottaGoBye is an angst-fuelled multi-media examination of the crazy head spaces our social anxieties draw us into." InDaily

CLAUDIA OSBORNE is currently completing a Fine Arts degree at UNSW Art and Design (COFA) studying sculpture, performance and installation. Claudia’s directing credits include Oleanna (SUDS), as a co-director, King St (Jetpack Theatre Company) and 4.48 Psychosis (SUDS) and as an assistant director, The Cherry Orchard (New Theatre). Claudia has trained as an actor with Atlantic Acting School in NYC, The Royal Academy of Dramatic Art(RADA) in London. Her theatre credits include Out of Place, The Laramie Project, Citizenship, Bookends, Romeo and Juliet (ATYP), The Merry Wives of Windsor (RADA). In 2015 Claudia was one of eight artists selected to form PACT’s inaugural Rapid Response Team.

THOMAS DE ANGELIS is a playwright, whose works include “Jack killed Jack” (Sydney Fringe Festival; 2012), “The Worst Kept Secrets” (Seymour Centre; 2014) and “Unfinished Works” (Seymour Centre; 2016). He attended NIDA to study a Master Of Fine Arts (Writing For Performance) in 2015. In 2016, Thomas attended the ATYP National Writers Studio. He is the dramaturg for “Bathroom Opera”, a new site-specific opera for the Level 2 Women’s Bathroom of the Queen Victoria Building in Sydney.

SAM BREWER is an actor who has been involved in a number of independent theatre shows throughout Sydney. Most recently Sam has appeared in "The

Big Bruise" a one-man show by Montague Basement at 107 Projects in Redfern.

CHARLIE DEVENPORT obtained her certificate II of Musical Theatre at WAAPA, before making her professional stage debut in the MS societies annual pantomime Puss in Boots. Soon after she was accepted into the WAAPA Acting course. During her time at WAAPA Charlotte played a variety of different roles including: Jess in Love and Money, Casca in Julius Caesar and Harriet in The Man of Mode. Her credits include, Black Swan State Theatre Companies 2014 production of Dust in the dual roles of Ailsa and Emma and Dirty People in the role of Lucy for JackRabbit Theatre. She has also appeared on screen as opera singer Nelly Melba in Channel 7's Australia: The Story of

GRACE VICTORIA her had professional debut as Zina in Solzhenitsyn’s ‘The Love Girl and The Innocent’ (dir. Matthew Dunster) at the Southwark Playhouse in London in 2013. Grace then appeared as Celia in Black Swan State Theatre Company’s ‘As You Like It’ directed by Roger Hodgman, and Elizabeth Taylor in Playing Rock Hudson (codirected by Cameron Lukey and Jason Langley) at The Old Fitz in 2014. Grace has worked with The Kings Collective as a director, actor and producer since 2014. In 2015 she appeared as Lisa in ‘The Wonderful World of Dissocia’ for the company. Whilst training at WAAPA, Grace received the Sally Burton Shakespeare Award and a National Australian Voice Association Award.

DANIEL HARRIS is an honours graduate with a Bachelor of Design in Visual Communication from the University of Technology, Sydney. He has a passion for graphic design and animation. Since graduating, he has undertaken a variety of design projects, and has been particularly drawn to those with a social justice message. These have included issues regarding to disability and mental health. HeySorryGottaGoBye is Daniel's first foray into theatre production, and here his passion for animation and social awareness has found the perfect home.

ANGUS MILLS is a freelance sound designer and producer with Hons. in Digital Media from UNSW Art & Design. He is currently involved in a number of short films and theatre productions as a sound designer, his most recent work 'Carne' was premiered at The Sydney Opera House for TedX Sydney. In 2014 Angus was awarded The Jonathan Blakeman Music or Soundtrack Award from The University of New South Wales for a contemporary electronic composition that he wrote. Angus is also involved in The Sydney electronic music scene and currently composes and releases music under the name James i.V. His music has had support from radio programs including The Bridge, Sunsets, Thump and Spin The Bottle on FBi as well as Down Low Disco on 2SER.

RUTH HOLLOWS is currently studying an Advanced Diploma of Producing at AFTRS and holds a Bachelor of Theatre and Performance Studies from UNSW. Recent currents include Drift at ATYP for Two Peas and The Girl at the Leichhardt Site and Sound Arts Festival 2016. For Edgeware Forum, in 2016 Ruth co-produced the sold out Contrite Spirit as part of the Leichhardt Site and Sound Arts Festival. In 2015 she was Stage Manager and Sound Op for their sold out Sydney Fringe Festival production of Eight.