“Once more unto the breach, dear friends, once more!”

Is it King Henry V the night before the battle of Agincourt?

Is it a madman who thinks he is King Henry V?

Is it all just a fiction of the actor’s imagination?

From a roguish adolescence, to a stately coronation, to a triumph at the battle of Agincourt, and into the realms of courtly love… Join award winning Australian actor Brett Brown on the journey of King Henry V in a bold one-man adaptation of Shakespeare’s classic play.

“Emerging star… He can sing, dance, and act most people into a corner” – The Sydney Morning Herald

★★★★★ "He (Brett Brown) is an incredibly accomplished young actor. How is it he isn’t already a star? He nails Shakespeare. He has the lot, the poise and pose, the emotions, the courage and cowardice, doubt and certainty."A little tea, a little chat

★★★★"something different and new, but true to its roots – well worth a spot in your fringe calendar..." The Clothesline 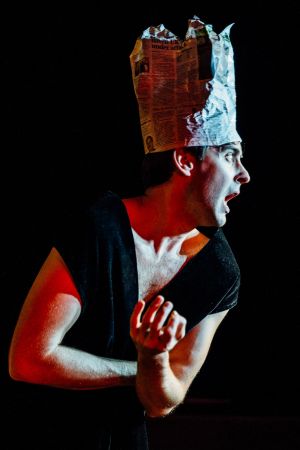 BRETT BROWN is a graduate of the Royal Academy of Dramatic Art (RADA), London. An award winning actor and singer, he has performed with Opera Australia, The Royal Shakespeare Company, Shakespeare's Globe, the BBC, and in plays and musicals on London's West End, and in theatre festivals throughout Europe. His one-man performance of Shakespeare's HENRY V played to critical acclaim at the major European Shakespeare Festivals. He was awarded 'Best Solo International Shakespeare Performance 2016' at the Ostrava Shakespeare Festival, Czech Republic. Film includes the Academy Award winning THE THEORY OF EVERYTHING.