EGLANTYNE is an inspiring new solo play about the visionary, Edwardian, human rights activist Eglantyne Jebb. Eglantyne Jebb is one of the most influential women of the 20th century yet one of the least known. Eglantyne was a courageous, passionate, humanitarian, human rights activist and social reformer. In 1919, responding with humanitarian zeal to the devastating famine in post-war Europe, Eglantyne and her sister Dorothy Buxton founded Save the Children, the world's leading independent organisation for children.

Written and Performed by Anne Chamberlain

"What makes us care? What makes someone work so hard for others, it is to the detriment of their own health? Why give up a cushy comfortable life and fight for those who have little or nothing? Male names spring to mind: Christ, Martin Luther King, Ghandi. But women? Joan of Arc... Tonight Anne Chamberlain‚s rich and fascinating creation and portrayal of Eglantyne Judd introduces a new name and life to most of us". - Ngaire Riley, Theatreview

On Eglantyne, Chamberlain said “When I first read about Eglantyne, I felt compelled to share her story by creating a piece of theatre. Eglantyne was a brave, unconventional, global thinker. Sadly, many of Eglantyne’s humanitarian concerns are the same concerns we grapple with today – incredibly distressing is the desperate plight of Syrian refugees flooding into Europe. As well as Eglantyne’s big heroic moments, the play explores her struggles, vulnerabilities, disappointments and heartbreaks which seems to draw her closer to our lives, our frailties and our humanity.”

Anne co-wrote, produced and performed in the children’s musical Witch Mother and with the cabaret comedy group The Flannelettes. Anne’s other notable acting roles include Viola in Twelfth Night, Adrianna in The Comedy of Errors, Jill in Equus, Joyce in The Ruffian on the Stair and Vicki in Long Gone Lonesome Cowgirls. Anne’s other work includes Voice Artist for Deutsche Welle Television, Manager of the 2012 New Zealand Arts Festival's Writers Week and Michael Palin's Personal Assistant. 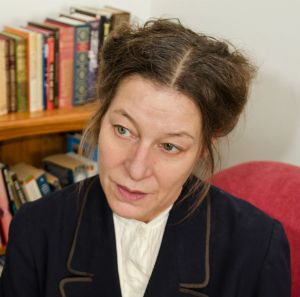