One is a student jihadi from London, the other a Victorian member of the Fishing Fleet (the women who travelled to India to be brides of those men who were setting up the Empire). Both are idealists: intelligent adventurers, with strong religious beliefs. Both travel to the East with a mission to impose a system of government upon an unwilling people. The Victorian would play a leading role in the establishment of the Empire; the jihadi, a caliphate. Presented as a pair of intercut monologues, Naylor tells the stories of two women, born 175 years apart.

Following a critically acclaimed season at Edinburgh Fringe 2015 and London’s iconic Arcola Theatre, Holden Street Theatres in association with The Gilded Balloon and Henry Naylor present the Australian premiere of Echoes by Henry Naylor, a provocative and brutal tale of colonialism and the rhyme of history.

★★★★ “Not only does he (Naylor) make these journeys rich in details, he leavens his pointedness with impressive quantities of wit crucially, the performances are restrained, committed, affectingly intimate.” - The Times

★★★★ “Cutting edge relevance ... Henry Naylor writes with clarity and black humour in terrible circumstances, making the point that the foundation of western society is itself steeped in the patriarchal barbarism we now rightly decry.” - The Scotsman

Henry Naylor is best-known for his comedy work with Andy Parsons, with whom he presented nine series of Parsons and Naylor’s Pull-Out Sections on BBC Radio 2. He’s also been a prolific satirist for TV having been the lead writer on Spitting Image and having written for Alistair MacGowan, Rory Bremner, Dead Ringers, among others.

Although known primarily for his comedic work, Naylor has been exploring hard-hitting drama. 2014 saw Naylor writing his first theatre tragedy, the Collector, which explored the issue of prisoner abuse during the occupation of Iraq, and examined the brutalisation of decent people by war. The Collector went on to play a sell-out season Off-West End in London at the Arcola Theatre.

His 2015 follow-up, Echoes has been no less successful. It dealt with the controversial topic of jihadi brides - comparing them to Victorian pioneers. It won the Spirit of the Fringe Award, and once again received spectacular critical acclaim and a run at the Arcola. The show is set to tour the world in 2016, with runs in Adelaide, New York, London, Prague and Helsinki already scheduled.

Filipa Braganca reprises her role of Samira in Echoes at the 2016 Adelaide Fringe Festival after a critically acclaimed run at the Edinburgh Fringe Festival, followed by a run in the Arcola Theatre, London.

Braganca’s credits include the new musical Une Ville a Mille Temps which tells the story of Belgium's most celebrated singer and song writer Jaques Brel through the character of his daughter France Brel, interpreted by Filipa.Filipa is a music lover and is a member of the 7-piece balkan band The Balkanoes performing in various venues across London. Before embarking on her acting career she studied French and Spanish at the University of Nottingham where she was a member of the New Theatre there, she then moved on to study acting in London at Drama Studio, and graduated last year.

Felicity Houlbrooke reprises her role in the critically acclaimed echoes at the Adelaide Fringe Festival. Having studied and trained at Mountview Academy of Theatre Arts, Houlbrooke has performed in The King’s Speech, a true and heart-warming story of one man’s struggle to overcome his personal affliction and, in his country’s darkest hour, deliver the now iconic speech broadcast across the globe to inspire his people. Further credentials include The Importance of Being Earnest, as well as the Black Coffee, The Railway Children amongst others.

Emma trained as a director at Mountview Academy of Theatre Arts. Emma is Artistic Director of Theatre Sotto Voce whose most recent productions include the world première of THE UNQUIET GRAVE OF GARCIA LORCA by Nicholas de Jong, THE FLOOD with So & So Arts Club and ROMEO AND JULIET. Her recent work as a director includes THE BENCH and POWERPOINTS, Theatre 503; ROMEO AND JULIET, Sotto Voce at Holy Trinity Church Sloane Square; MURDER IN WHITECHAPEL, The Tristan Bates; DETRIMENTAL for Vertical Line at Greenwich Theatre and DYING CITY, The Cockpit. Emma was also a ‘young director’ on THE GLOBE TO GLOBE FESTIVAL for Shakespeare’s Globe. 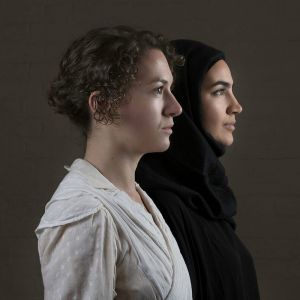