The award winning show Labels by Joe Sellman-Leava (UK) draws on writer and performer Joe Sellman-Leava’s experiences of mixed heritage to explore the broader issues of racism, immigration and displacement. The solo show centres on Joe’s upbringing in rural England, chronicles his experience as a boy growing up in the 90's, and explores the bridges and barriers that were formed between him and his peers.

Labels by Joe Sellman-Leava premiered in the wake of an ongoing humanitarian crisis in Europe and fierce debates around migration and refugees.

Labels by Joe Sellman-Leava is one of two Holden Street Theatre's Edinburgh Award Winners for 2015 and also collected the Scotsman's Fringe First Award, was nominated for the Amnesty International Freedom of Expression Award and played to sell-out houses in the Edinburgh Fringe 2015.

Labels by Joe Sellman-Leava was inspired by a racism and equality workshop, led by Oscar-winning writer, actor and activist Emma Thompson, at Exeter University, 2009. The rise of far right parties both in Britain and across Europe compelled Joe to re-develop Labels By Joe Sellman-Leava for Edinburgh Fringe Festival 2015.

Joe uses his own family’s stories about migration and mixed heritage to open a wider discussion about the way we talk about, think about and treat our fellow human beings. The play’s examination of Europe’s ongoing refugee crisis has sadly become more resonant in recent months.

Worklight and Holden Street Theatre hopes that by touring the show in Australia and the UK over the coming months, more people will be engaged in conversation about how the words we use affect the decisions we make about one another.

"...the student ranks who fill Holden Street for much of its brilliant program absolutely whoop with approbation at this intelligence from a first-generation English mixed blood." The Barefoot Review

"Joe Sellman-Leava makes us laugh, makes us angry, and makes us very glad to have met him, albeit far too briefly." Broadway World

"I would highly recommend people go to see this performance as it is such as thought provoking place about issues that are ongoing at the moment."Radio Adelaide 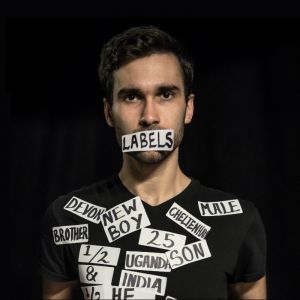